May 11, 2019 By Willow Moon
This post may contain affiliate links. As an Amazon Associate I earn from qualifying purchases.

This simple nut free Nacho Mac and Cheese is rich, creamy, and spicy. Made on the stovetop, it is an easy meal. The nacho cheese sauce can be used on nachos and veggie burgers as well. 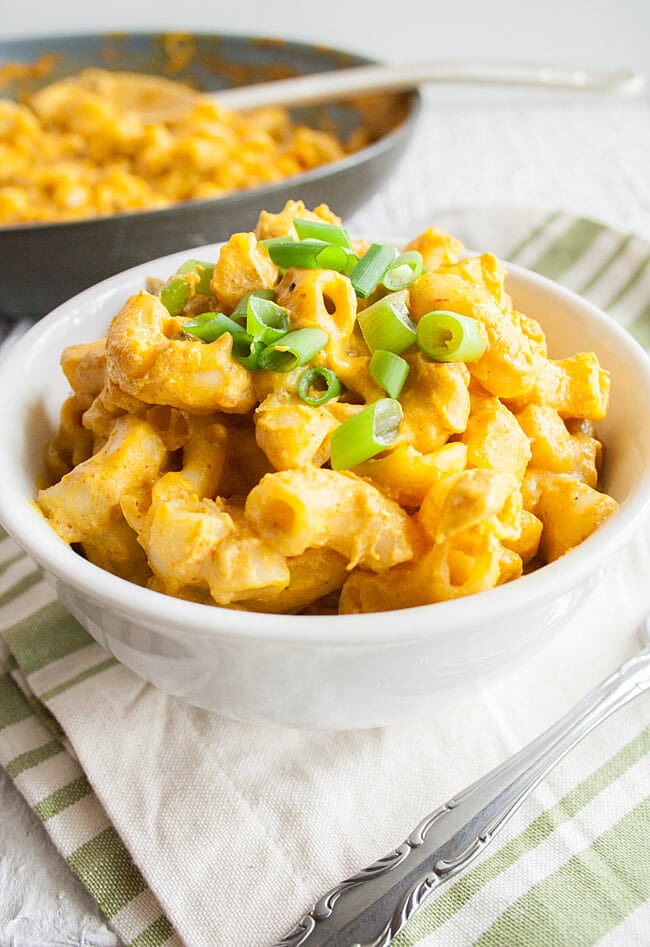 Since I love spicy foods, I like this spicy mac and cheese even better than my previous recipe.

What Is Nacho Mac and Cheese Made Out Of?

This nut-free vegan mac and cheese is made with silken tofu, nutritional yeast, corn starch, green chiles, salsa, and spices. For the elbow pasta, I used white rice noodles.

This Mexican mac and cheese is rich, creamy, and spicy. It has all the flavors of nacho cheese sauce, but it is dairy free. 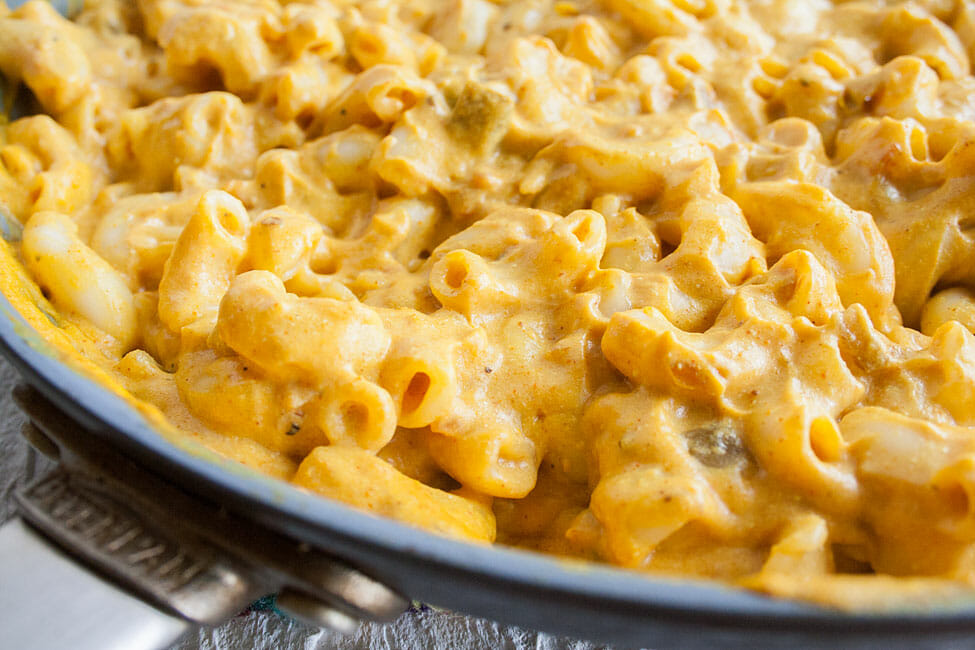 How to Make Nacho Mac and Cheese

If you are using white or brown rice noodles, like I did, you may want to boil your noodles in a larger amount of water than you normally would for other types of pasta, and don't cook it in water that's high in arsenic. There are growing concerns about arsenic levels in rice.

Boil noodles as per directions, but cook about 3-4 minutes less since you'll be cooking the noodles in the sauce a little later. Add a lot of salt. It should be salty like the sea.

Reserve about ¼ cup of the pasta water. It is starchy, which will help the sauce to stick better to the noodles. Again, if you're concerned about arsenic levels, you may not want to do this for rice based pastas.

Check your pasta! Taste it to see when it's ready. Again, you want it cooked for less time since it will cook some more in the sauce. 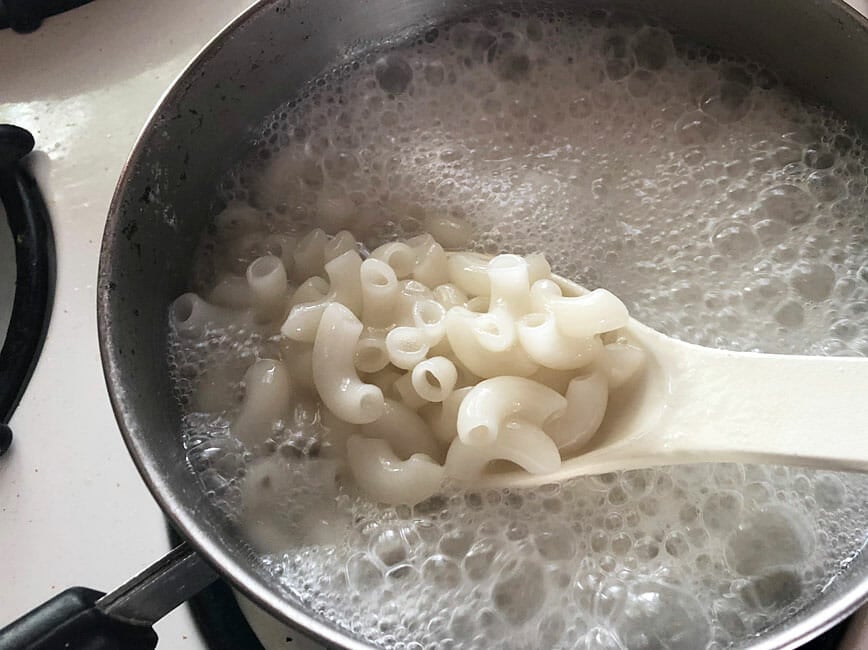 Mix silken tofu, nutritional yeast, corn starch, half the green chiles, and spice in a food processor. Taste the mixture to see if you want more spices.

Keep in mind raw corn starch doesn't taste as good as cooked. By tasting the mixture you'll at least have an idea of how spicy it will be, but remember there's still salsa and the other half of green chiles that will be added later. 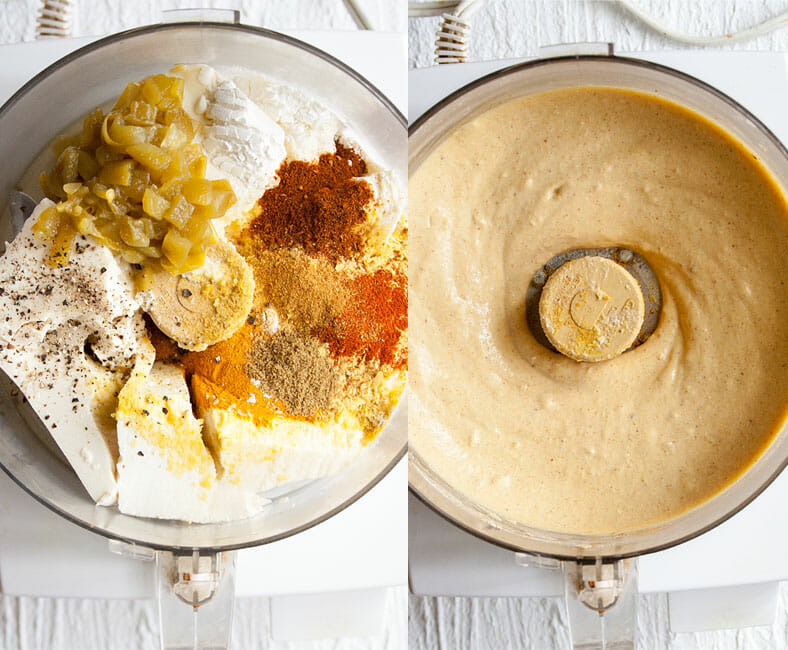 Pour the nacho cheese sauce mixture into a pan, along with salsa, the other half of green chiles, and Earth Balance. Heat on medium heat. Cook until the Earth Balance melts. 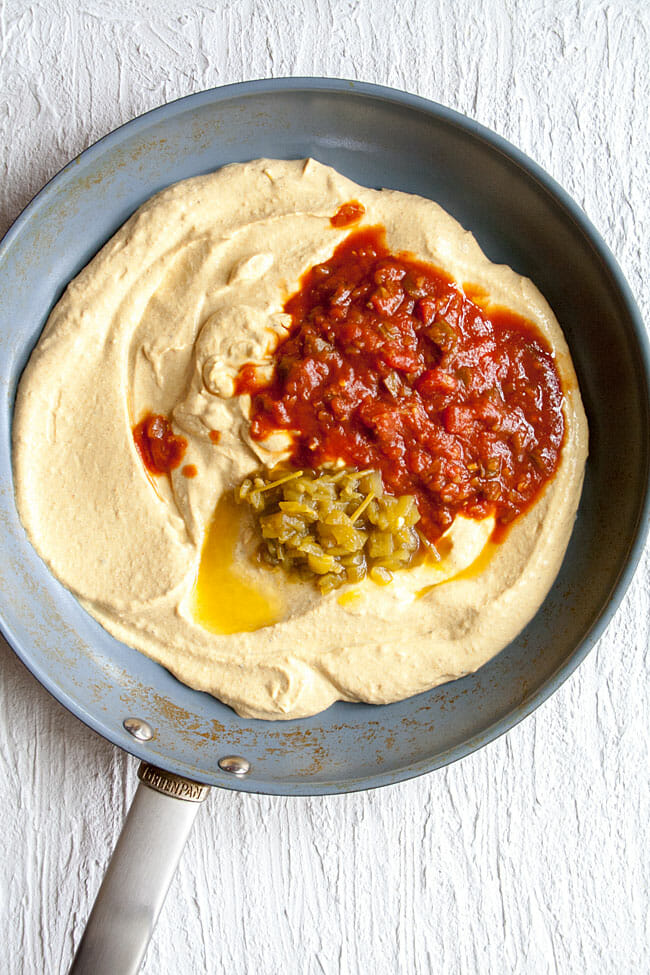 Add the pasta and pasta water. Simmer for about 5 minutes, until heated through.

Serve with chopped green onions, sliced jalapeño or diced green chiles. This recipe doesn't call for a whole can of green chiles, so you'll have a little extra. 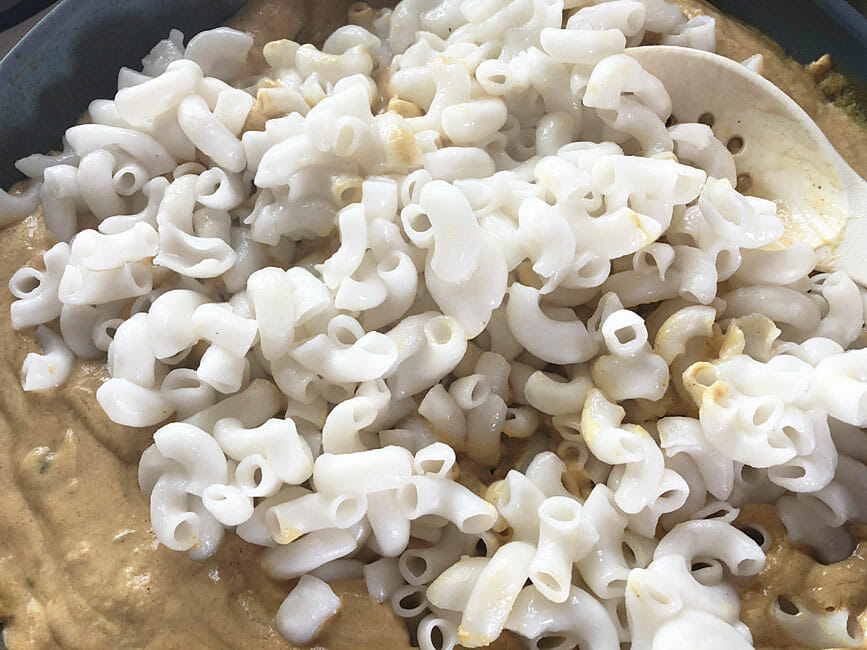 What To Serve With Nacho Mac and Cheese 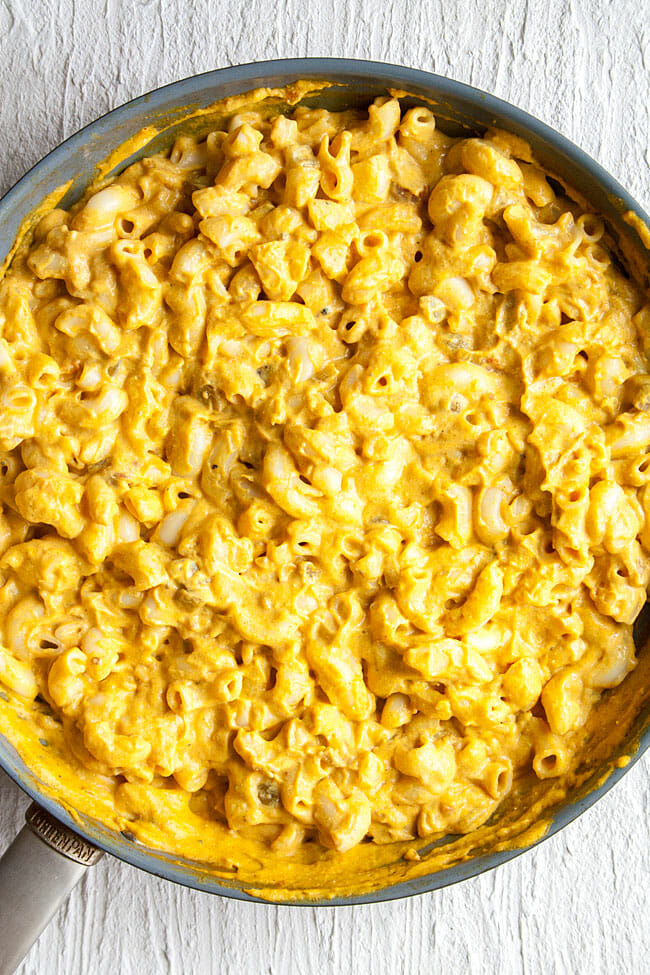 How Long Does Nacho Mac and Cheese Last?

This Nacho Mac and Cheese will last 3-5 days in the fridge. I've gone a day or two past that and it still tasted good.

This simple nut free Nacho Mac and Cheese is rich, creamy, and spicy. Made on the stovetop, it is an easy meal. Click To Tweet 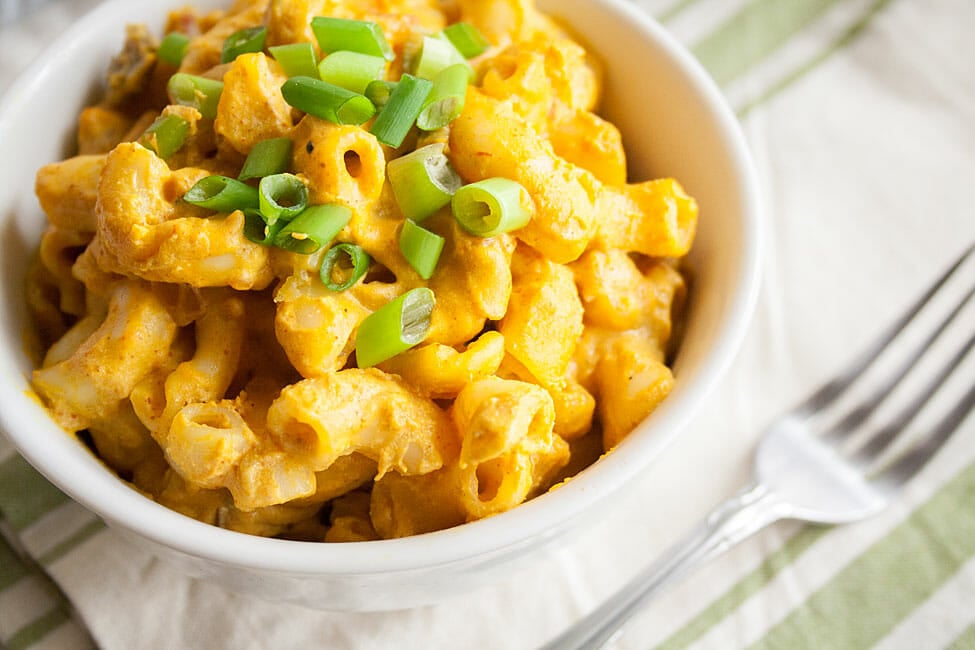 Vegan macaroni and cheese with nacho cheese sauce, what could be better? This spicy comfort food is the stuff dreams are made of! 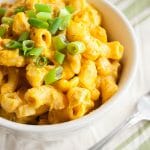 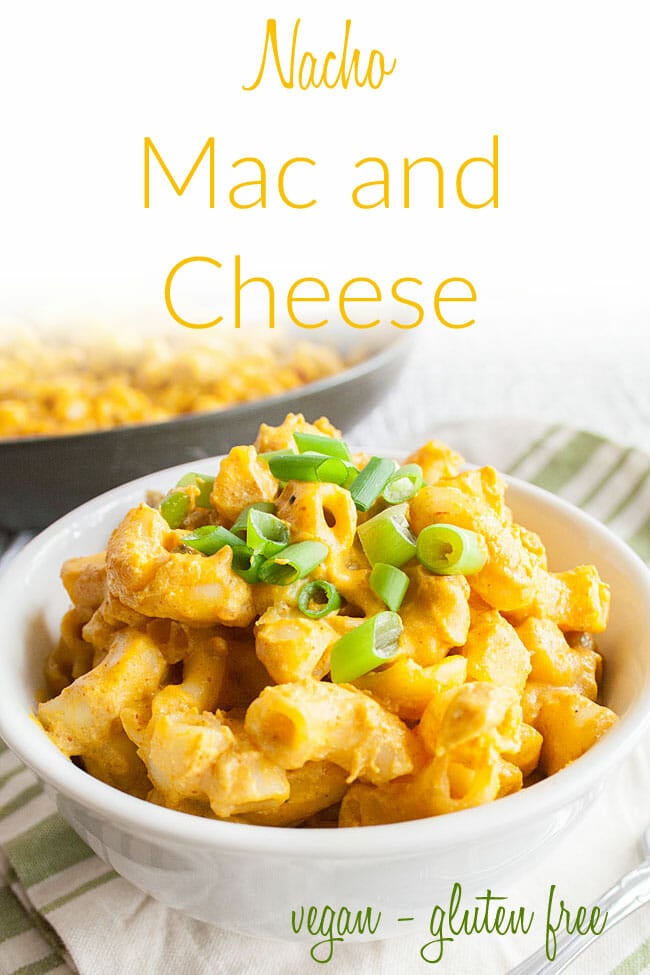