March 26, 2022 By Willow Moon
This post may contain affiliate links. As an Amazon Associate I earn from qualifying purchases.

This Spinach and Refried Bean Quesadilla is loaded with flavor, comes together in less than 15 minutes and can be the main dish or appetizer. 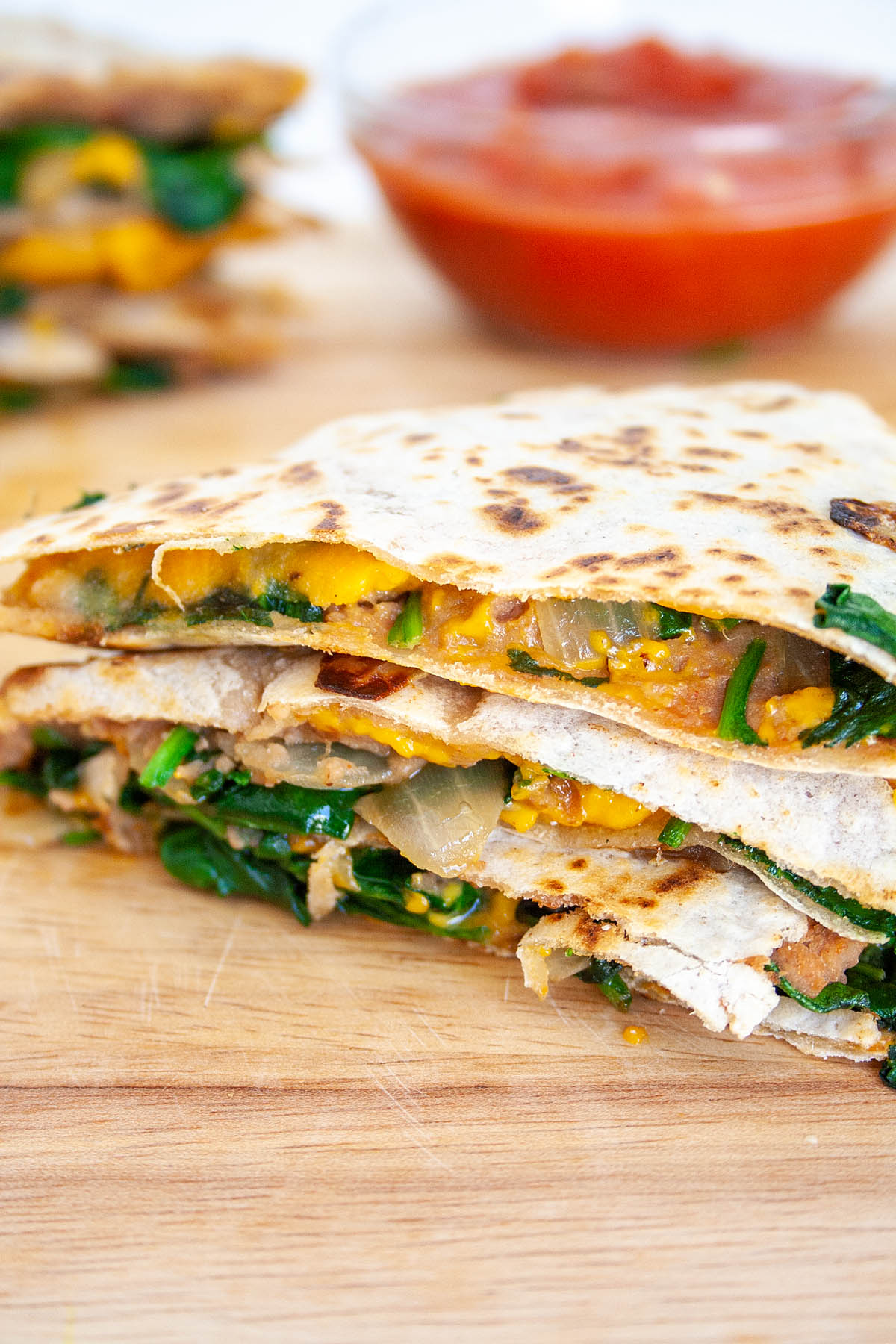 This Spinach and Refried Bean Quesadilla could not be any easier. It is a quick and easy weeknight meal.

Serve this vegan quesadilla with refried beans as an after school snack, appetizer, or main dish. Eat it as is or customize it to your liking!

Sometimes I make a refried bean quesadilla as is without any veggies or vegan cheese. It is such an easy to meal to get on the table fast.

I like to use spicy refried beans because they have all the spices you need and makes cooking a quesadilla even faster. You could add roasted veggies or spinach and onions, like I did here.

I like the combination of spinach and onions because they cook quickly and go well with refried beans and vegan cheddar cheese.

This is an overview of the ingredients. To see the full list of ingredients with measurements and instructions, see the recipe card at the bottom of this post.

How To Make a Refried Bean Quesadilla 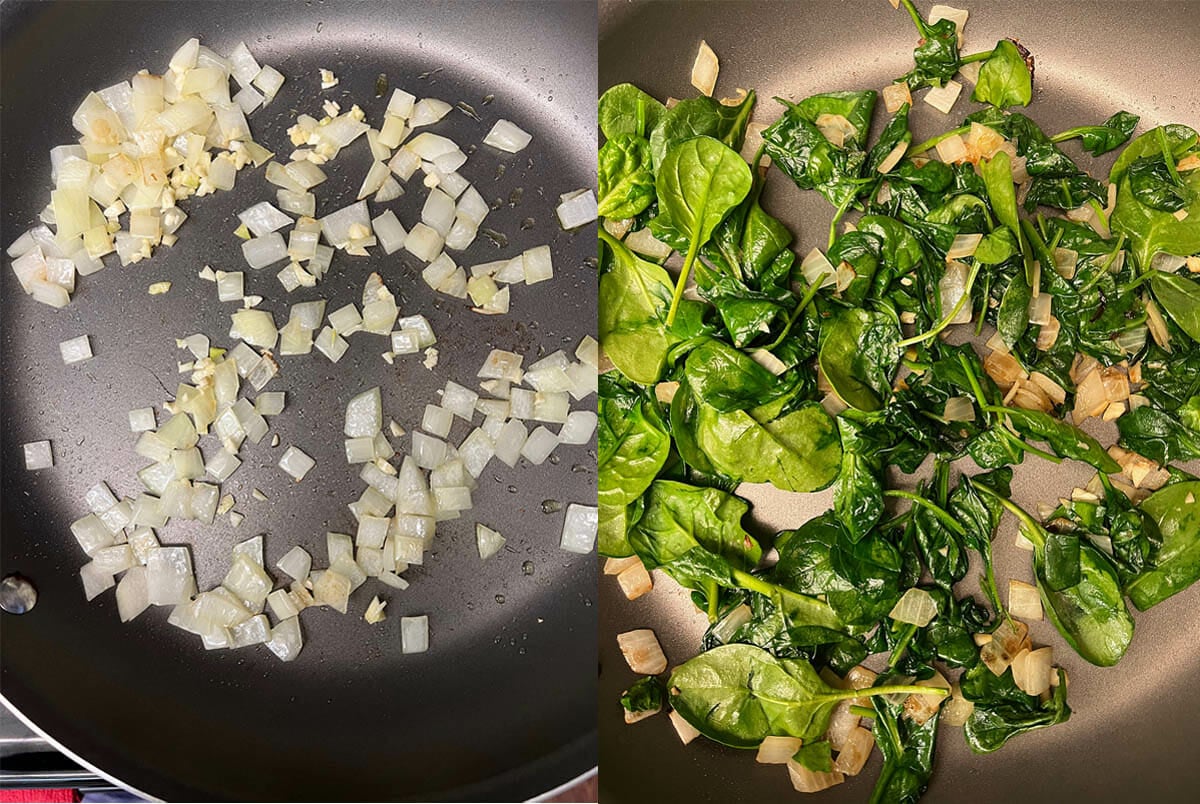 Step 4: On a tortilla, spread refried beans to the edges. 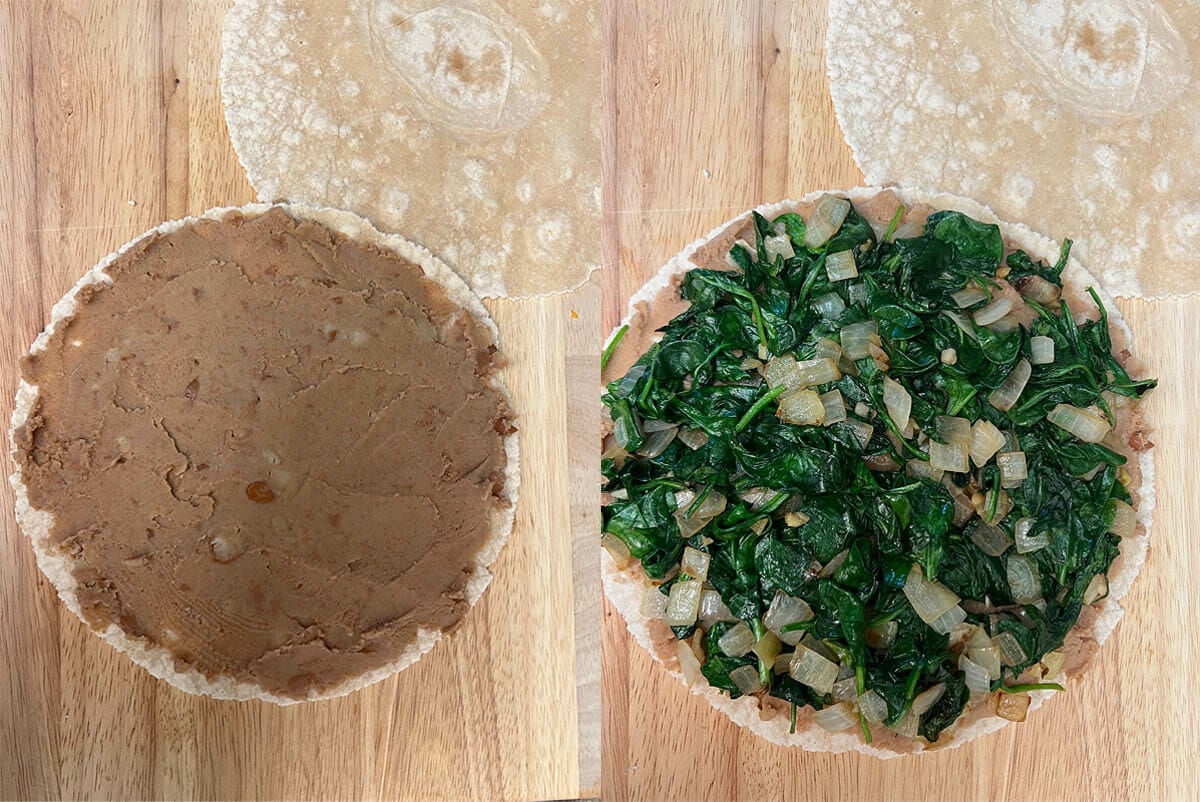 Step 7: Top with the other tortilla.

Step 8: Place filled tortillas in a skillet and cook on medium heat until starting to brown.

Step 9: Flip quesadilla and cook other side.

Step 10: Remove quesadilla from the skillet and slice. Serve with salsa or your favorite condiment. 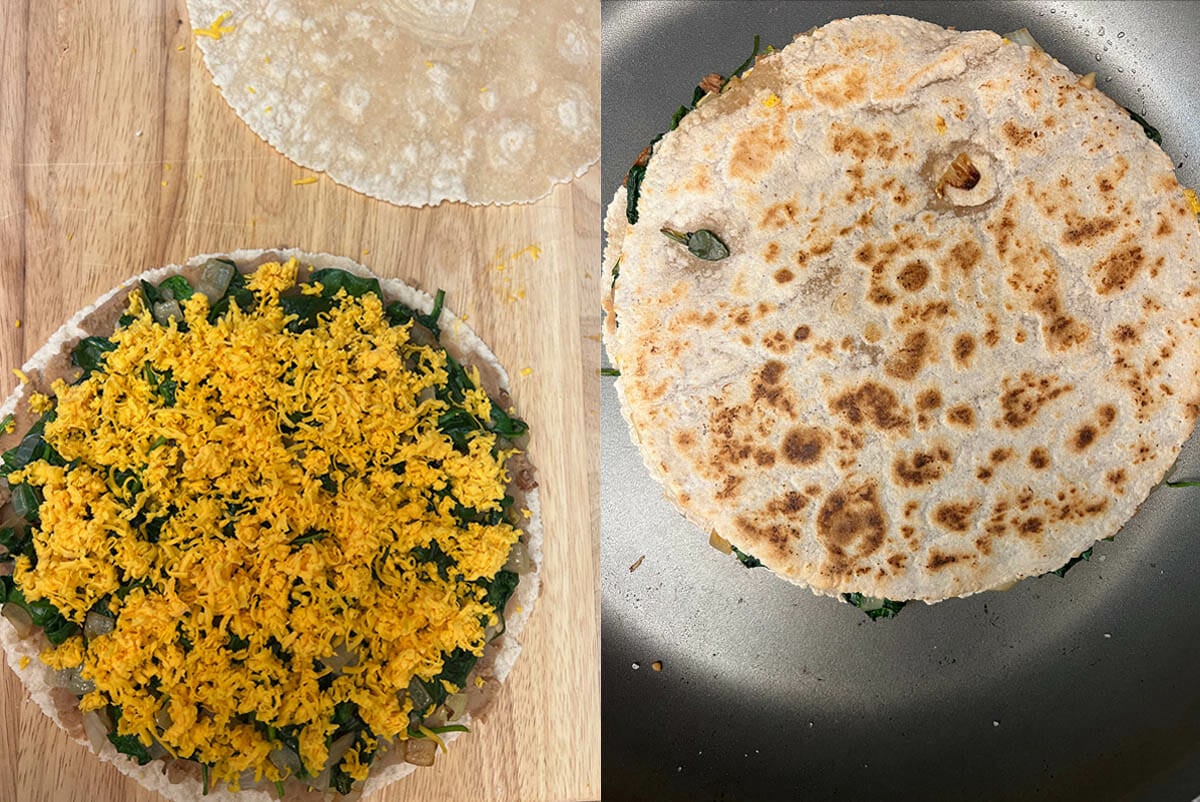 This Spinach and Refried Bean Quesadilla is loaded with flavor, comes together in less than 15 minutes and can be the main dish or appetizer. Click To Tweet 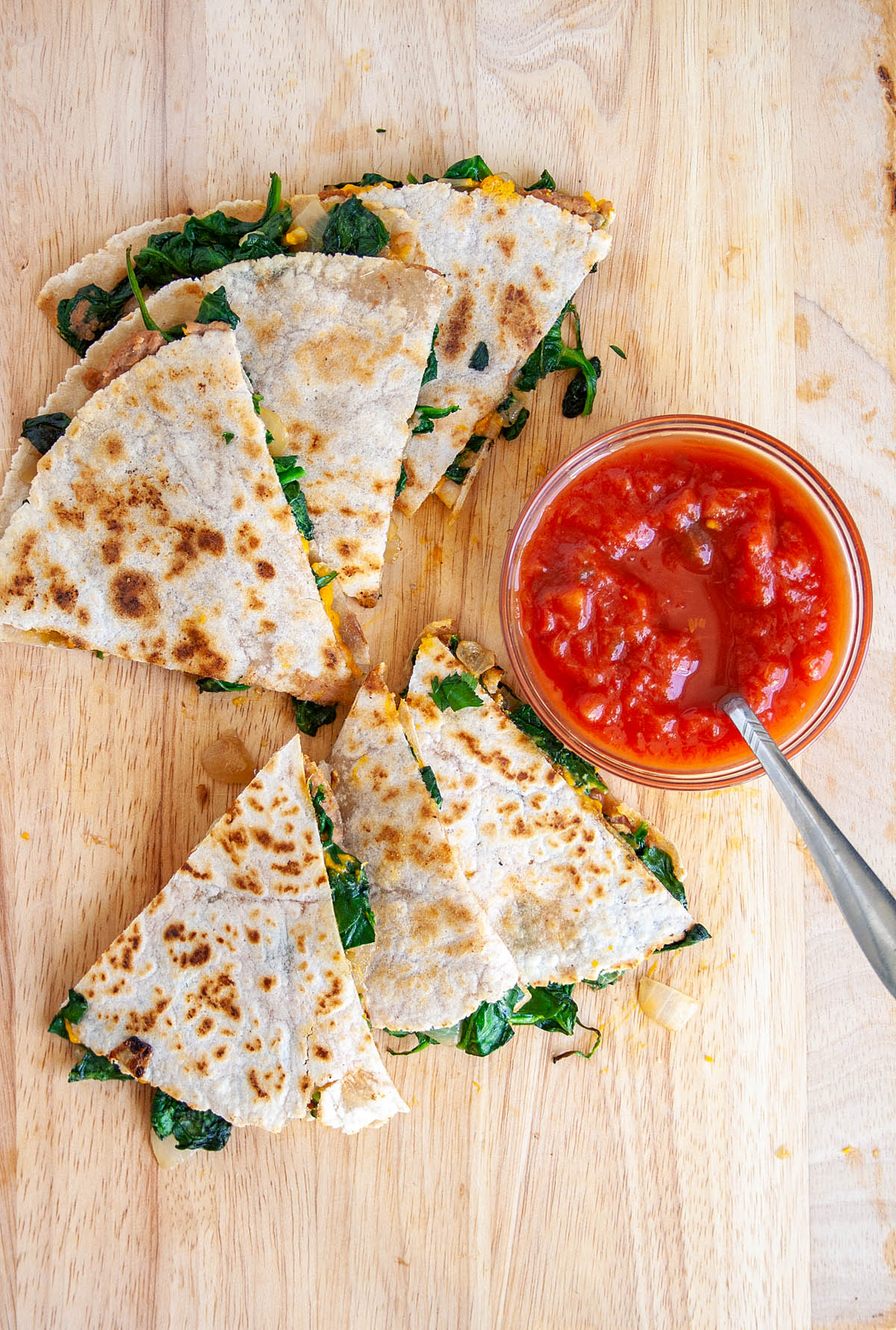 What to Serve With Quesadillas

How Long Will It Last?

The individual components of the refried bean quesadillas will last about 5 days in airtight containers in the fridge.

I recommend eating it once assembled. If you want to make it ahead of time or make more than one, I would eat them within a day or two. 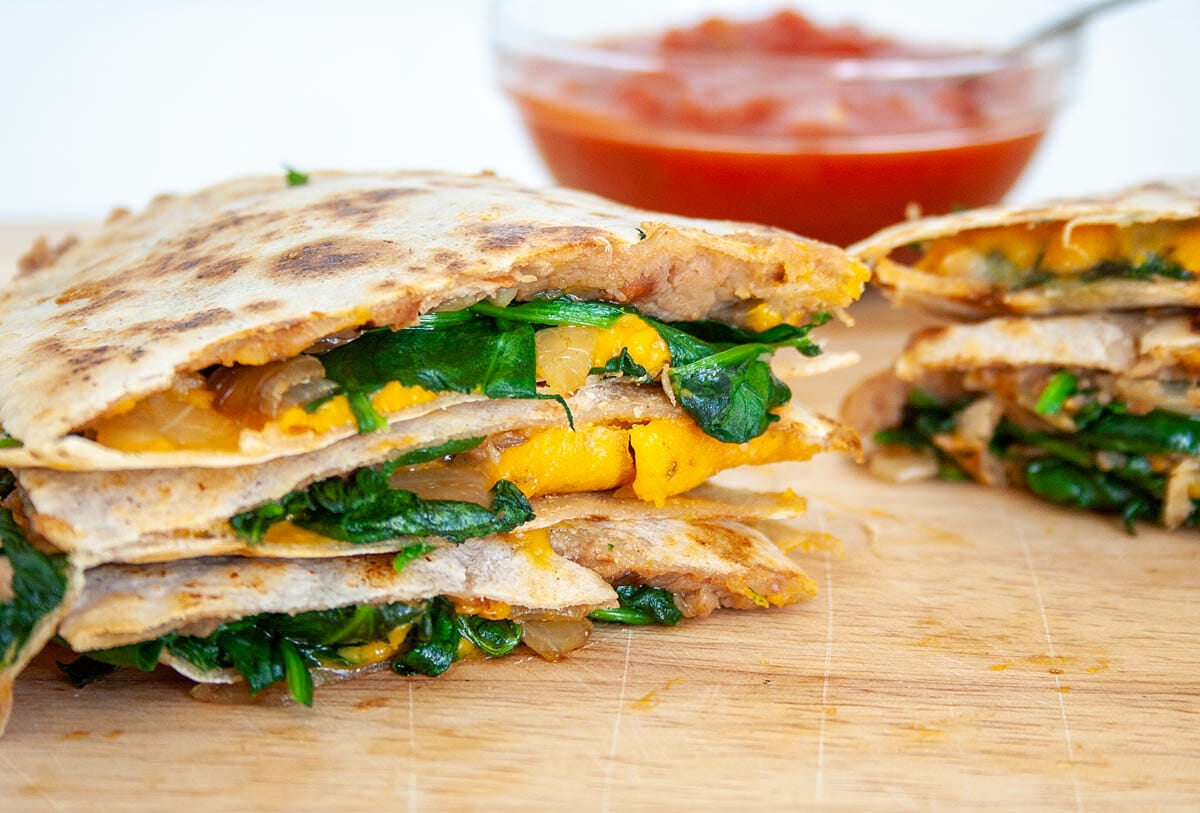 This refried bean quesadilla is an easy appetizer or weeknight meal.

*I originally posted this recipe November 23, 2014. I changed the recipe slightly, added new photos and text when I republished it. 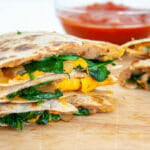 *This recipe has been changed slightly since republishing it. I cooked the spinach and added cooked onions and garlic. I also changed the vegan cheese because the original one is no longer available. 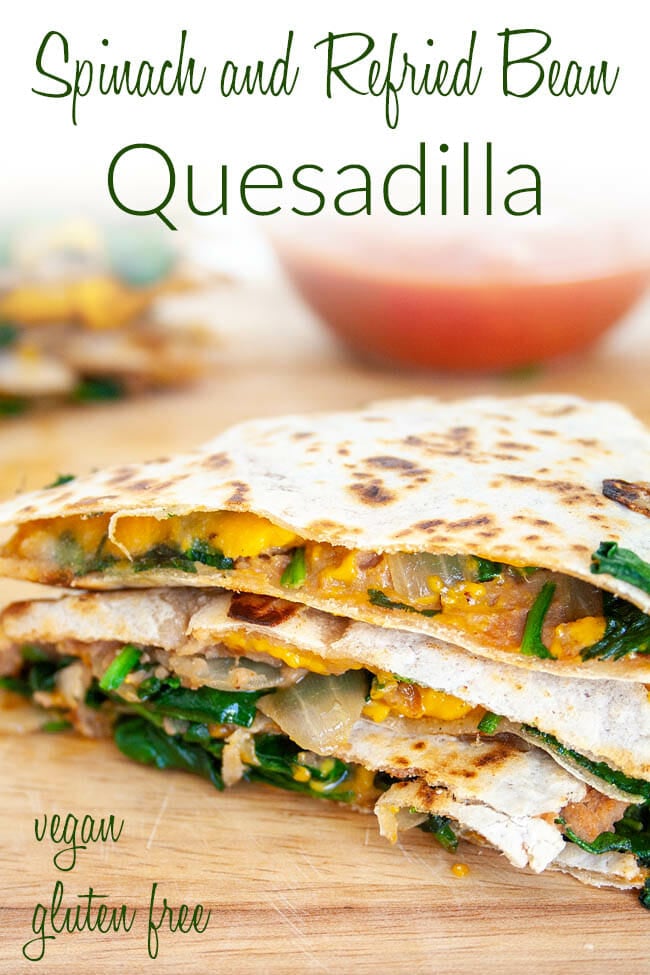