March 24, 2018 By Willow Moon
This post may contain affiliate links. As an Amazon Associate I earn from qualifying purchases.

This easy Vegan Refried Bean Burrito with Jalapeño Cilantro Hummus is perfect for lunch or a weeknight meal. It can be customized to suit your tastes. Make it spicy, smoky or mild by switching out the hummus. 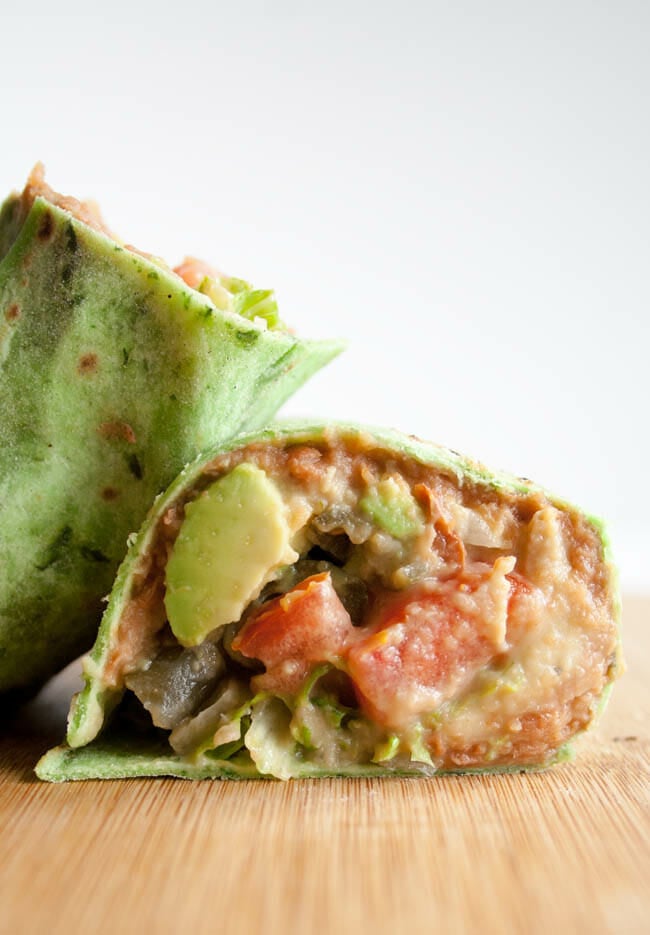 I created this Vegan Refried Bean Burrito with Jalapeño Cilantro Hummus while I was in a wheelchair from a broken ankle. I wanted to keep creating recipes because it is my favorite thing to do, but I wanted to keep things simple.

Lugging my backdrop into my dining room was a chore and everything took me four times as long, so easy recipes were all I wanted to do.

Not to mention, looking back at the Top 10 Recipes of 2017, many of them were pretty easy. I remember when I was working as an elementary school teacher I would come home exhausted.

The last thing that I wanted to do was spend a lot of time in the kitchen. I can understand why so many people gravitate towards easy recipes.

This vegan bean burrito could not be any easier. You don't even have to make the Jalapeño Cilantro Hummus that I linked.

Buy one if you are short on time. I actually didn't use my recipe because I was gifted with one, so I used that. 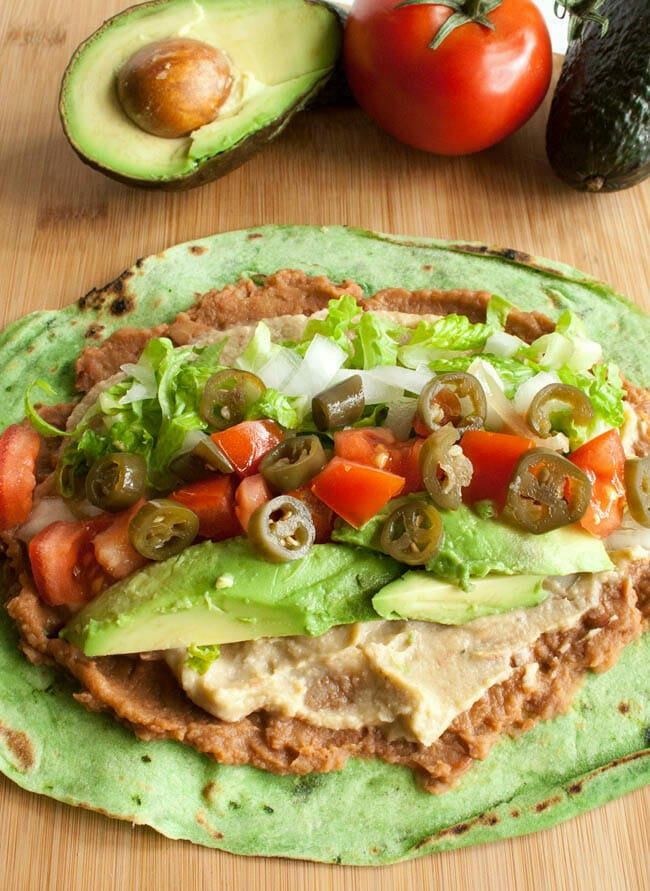 The other great thing about this healthy bean burrito is that you can customize it to your tastes. If you prefer a smoky spicy burrito, than a Chipotle Hummus might be for you.

If you don't like spicy food you could opt for an Edamame Avocado Hummus or a Roasted Red Pepper Hummus instead, or leave it out altogether.

I didn't use any in my bean burrito, but Kalamata olives would make a great addition.

Any way that you make it, this simple bean burrito with vegan refried beans makes a great lunch or weeknight meal.

This easy Vegan Refried Bean Burrito with Jalapeño Cilantro Hummus is perfect for lunch or a weeknight meal. Click To Tweet 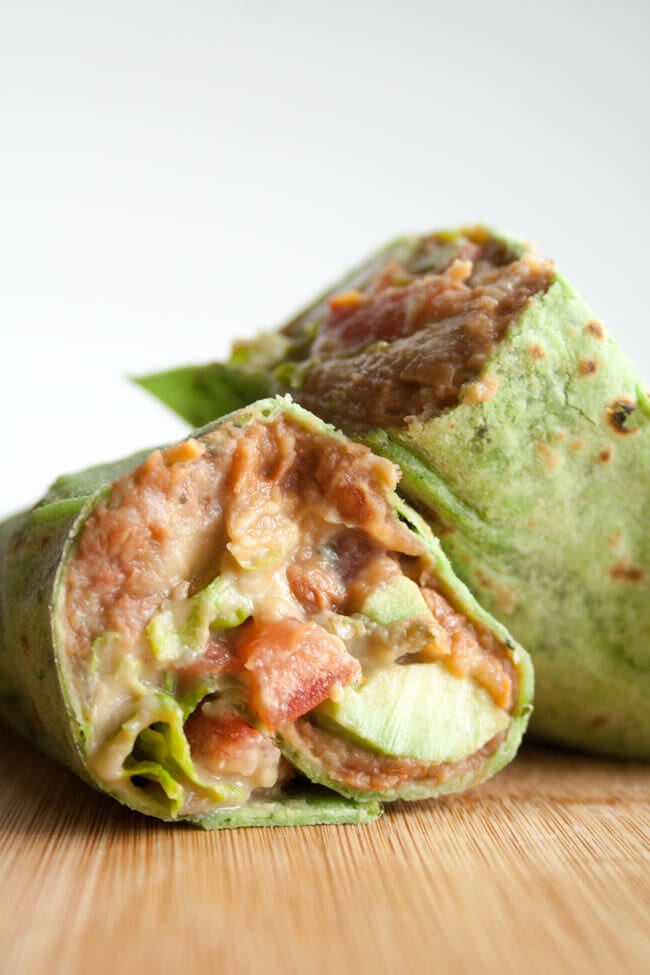 Influenced By Our Surroundings

I don't know if you've ever thought about it, but I do since I'm such a foodie. Ever since moving to Tucson about 18 years ago, my cooking has been influenced by my surroundings.

I didn't cook as much back then, but even if I hadn't moved to Tucson I don't think I would be cooking as much Mexican inspired cuisine as I do now.

There's no way I would have a recipe like Vegan Green Corn Tamales, since I learned how to make them from my husband who's made them for over forty years.

It's interesting to think about. 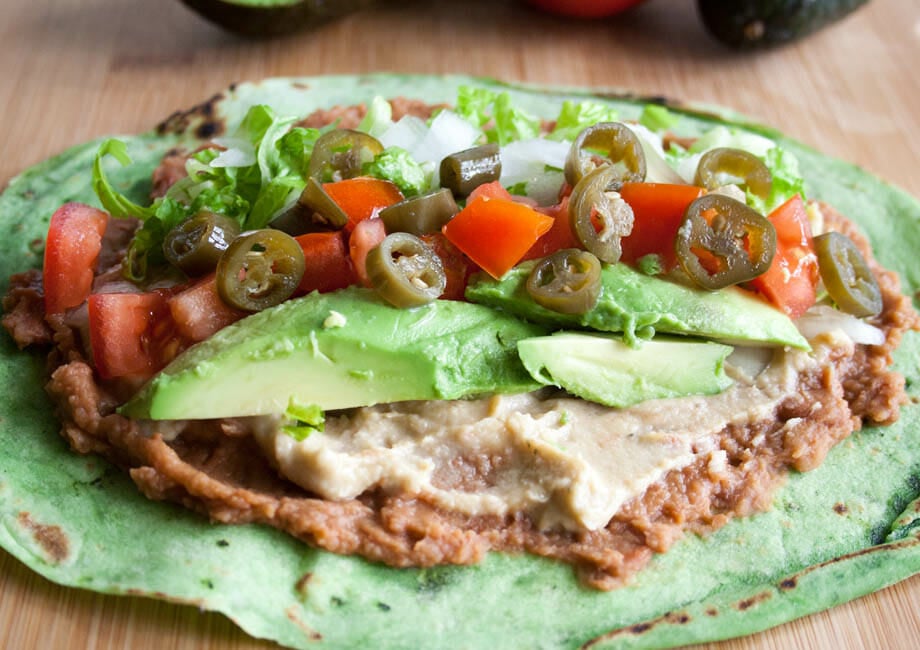 Tips For Rolling A Burrito 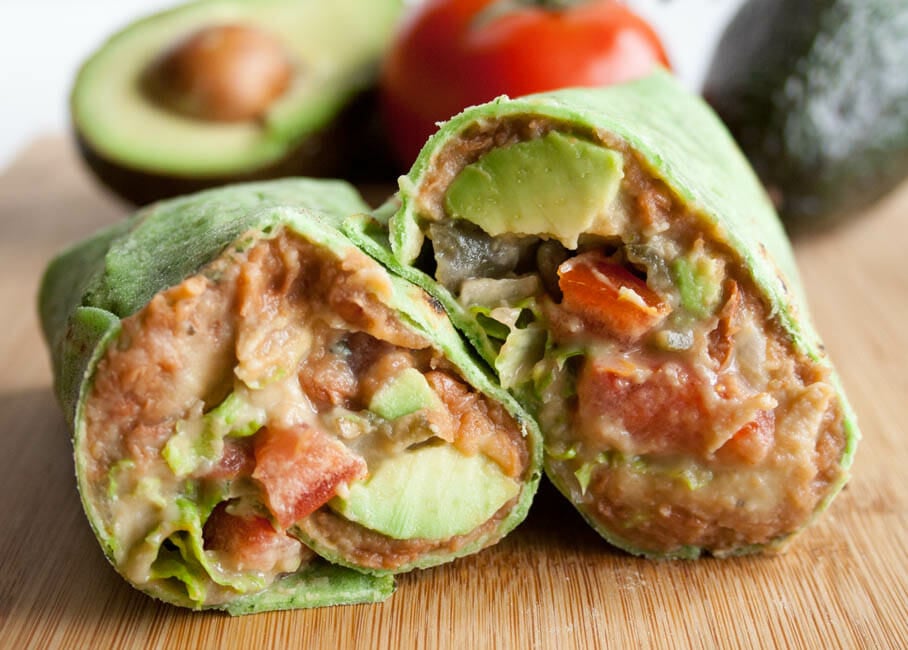 This easy vegan burrito takes minutes to make, so it is perfect for an easy weeknight meal. It is also easy on the pocketbook.

If you love this recipe, please come back and leave your feedback and star rating. 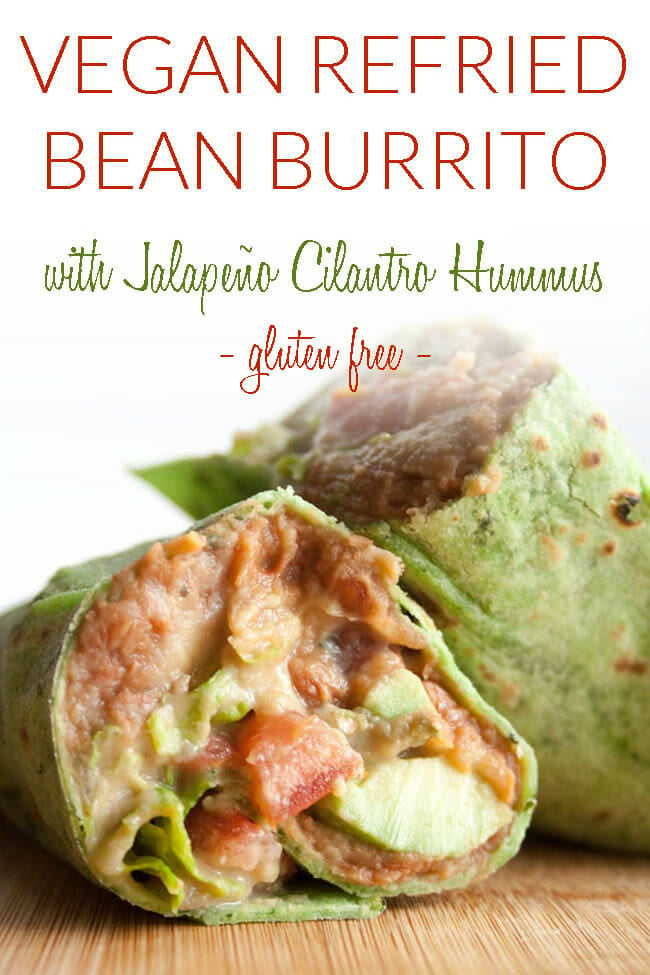